·      Title card contains a gear, a cathode ray tube and a stylised circuitboard that follow a chronological order diagonally right

·      Colours are that of the NewStatesman’s masthead

·      Title card disappears within four seconds; enough time for brand association to take place but not too long that it outstays its welcome

·      The bounce and retraction to the left of screen takes place in two sections, accelerating towards the end

·      The tube section of the cathode ray tube is transparent. Both this and the rotating gear are just there for some visual flair

i100 and Babb: the new cargo cults

Rise of the spin-off site

With the launch of Babb and i100 it is clear that news organisations are no longer sticking solely to the content-publishing strategies which work for print: an increased focus on shareable, bite-sized chunks of content has seen impressive returns so far. This is as much the case for the football statistics-driven Babb as it is for the topical data-driven ampp3d, which can be seen as the originator of this type of content publication legitimised by a respected news organisation’s backing.

Though spokespeople and editors for each of these spin-off organisations take pains to differentiate their site from the others – in fact, most specifically claim to be doing something entirely new – in practice they use a lot of the same language when describing their strategies. Invariably there is mention of the importance of the ‘shareability’ on social media and ‘connecting people directly with the content’, or the repackaging of existing content into an ‘easily digestible’ form.

This relatively new approach is driven by an increasing body of research, some of which is directly from social media sites: the Facebook News Survey 2013 found that half of Facebook and Twitter users, and well over half of reddit users, got their news from those platforms. As such, the spin-off news organisations are right to create new or repackage old content into forms which are more likely to be shared via social media channels.

However, the dangers of choosing to publish content this way are that changes to the fast-paced social media channels can negate the value of this type of content – publishing news to Facebook is already subject to the vagaries of that site’s algorithms – and, worse, that all the spin-off sites like ampp3d and i100 are simply cargo cults, trying to recreate each others’ success without a real understanding of why it works.

The first issue, that Facebook and Twitter’s rapidly changing nature could eventually hinder this type of content publication, can be seen in practice even now: news organisations publishing to Facebook must do so in the knowledge that the site’s algorithm currently filters out posts from users you do not regularly interact with. As such its reach is immediately limited, and relies upon readers sharing the content to ‘get around’ that wall.

Additionally, the fairly-recent integration of image content directly into Twitter’s newsfeed means that users can consume news infographics without necessarily having to follow it back to the news organisations’ own site. As such, there is little material benefit to that type of publication for the news organisation.

Neither problem is insurmountable: as interviews with the heads of those spin-off news sites have made clear the challenge is in creating clever content and publishing strategies that genuinely do draw readers to the main sites. While Babb appears to have struggled in its initial forays into publishing to social media (the Telegraph’s head of product for mobile Alex Watson telling TheMediaBriefing that it did not translate into visits to telegraph.co.uk), Trinity Mirror’s Newroom 3.1 digital-first approach has met with marked success, demonstrating this approach can have tangible benefits.

It is the second issue, that of the cargo cult approach to creating shareable content, which is the greater concern: back when blogs were first becoming recognised sources for news, news organisations would attempt to mimic the look and feel of the blogs, with limited success. As with the original cargo cultists they were simply trying to recreate the look of a thing without the real understanding of why it had worked in the first place, to their detriment.

It is already possible to see something similar working on the spin-off sites: i100 has an ‘upvote’ system for their articles which is specifically modelled after reddit’s system, and ampp3d has a notable Buzzfeed-inspired aesthetic and article titling system. The danger with such appropriation is the same as it was with the early news blogs: that they simply will not work with the type of content produced for the spin-off sites, especially as the means of publishing that content to social media change rapidly as those platforms develop.

All the sites, even ampp3d, are still in the early days of their existence, and it is extremely likely that they will change and adapt as they continue (i100 has a very clear ‘beta’ symbol next to its name, for example). However, the challenge facing them is strikingly similar to the challenge faced by print organisations when they first directly ported their print content to the internet: that just because something has worked elsewhere does not mean it will necessarily work for them now.

Tagged with: ampp3d, Babb, cargo cult, i100
Posted in Thinking

Food-Related Violence Rises in the capital

Cases of Common Assault rose by a similar degree, from 27 to 207. 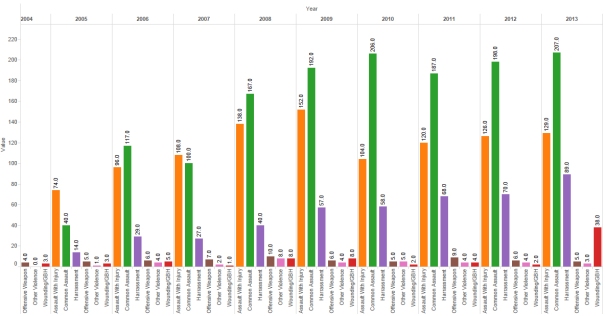 This is in contrast to the overall decrease in violent crime in London during the same period: Last year the number of violent crimes in the capital fell to the lowest recorded levels in decades.

There has been a similar rise in the number of crimes involving the theft of food from shops. Over the decade 2004 – 2013 the number of incidences of food theft rose by over 3,000 to 9,195. This compares with the overall decrease in theft numbers in the capital which fell by over 100,000 during the same time-span.

The figures, obtained via a Freedom of Information request to the Metropolitan Police, show that the amount of food-related crime has largely remained static over the past decade despite an overall decrease in the amount of crime. 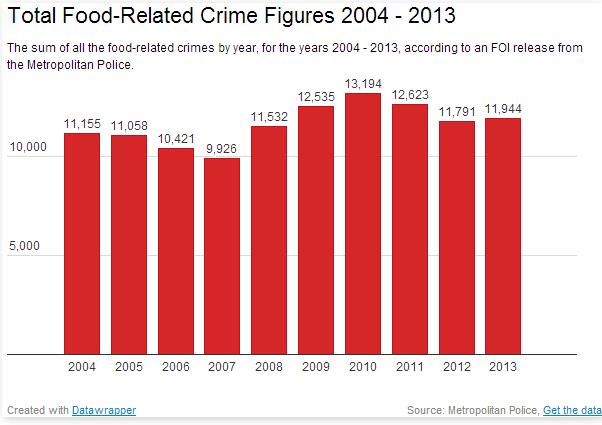 More startling, however, is the overall increase in more ‘immediate’ crimes such as violence and theft, which fly in the face of both the government’s efforts to reduce crime and their claims that food poverty in the UK is unrelated to its benefit reforms. That the greatest year-on-year increase in food-related violence took place in 2007, a period in which the financial crisis is considered to have peaked, suggests that, at the very least, both the rise in violence and the welfare reforms have a common cause even if they are not themselves correlated.

Masking the Effect of Benefit Reduction

The rise in violent crime and theft coincides with the reduction in welfare which has seen a dramatic increase in the number of hungry British families using food banks. Figures from the Trussell Trust, a charitable organisation set up to combat the ‘hidden hunger’ in Britain, show that 913,318 people were given aid by food banks in 2013 alone compared to 364,922 the year before.

The crime statistics can be seen as independent verification of the Trust’s claims that there is a growing food poverty crisis in Britain using metrics other than those directly related to food bank use. In 2013 a consortium of charities called for a formal UN investigation into poverty in Britain with the view to intervention. The situation has become so pronounced that the Red Cross has begun distributing food aid, a task it has not been forced to perform since the Second World War.

The statistics can also serve as a counterpoint to the Mail on Sunday’s maligned claims that many food bank users are ‘scroungers’ who enjoy the trappings of a rich lifestyle but prefer to ‘take advantage’ of food banks: Such a huge rise in food-related crime suggests that food poverty is endemic in Britain and that food banks genuinely do provide a much-needed service to tens of thousands of people.

Indeed, the figures also add a new dimension to the claims that food banks do more harm than good in the long-term: Graham Riches, director of the UBC School of Social Work and Family Studies, argues that food banks

“permit the state to neglect its obligation to protect vulnerable and powerless people. They encourage the view that food poverty is not a critical public policy issue”.

But if, even with the enormous rise in the use of food banks there is still a rise in food-related theft and violence, how bad might the latter be without any food banks at all?

Data on the real-world effects of benefit reduction is usually hard to come by, by design: In April 2013 the Department of Work and Pensions removed a text box on a form that allowed Job Centre workers to identify benefit reduction as the reason they were referring somebody to a food bank. This was widely seen as an attempt to prevent any hard, Government-backed data about the negative effects of benefit reform being easily obtained.

The figures released by the Metropolitan Police, while not conclusive on their own, can certainly support the idea that a reduction in benefits can have a negative effect on the population, whether it’s driving them to the extremes of violent crime, or onto the mercies of the food banks.